Jay is a former banker and value investor whose picks have greatly outperformed the S&P 500 since 2000.
Read J. Taylor's Bio 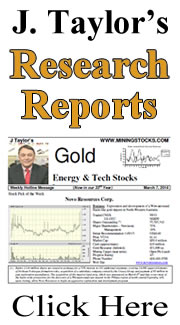 For Email Marketing you can trust
Jay Taylor's Blog

U.S. federal budget deficit hits $863 billion for the month of June alone! Expect exponential growth in the volume of federal red ink until the dollar based monetary system breaks down! Gold measured in worthless dollars is heading much, much higher.

The August active contract runs off the board at the end of this month and bullion banks are likely to be forced into large delivery volumes again. Furthermore, the exchange for delivery arbitrage facility between Comex and the LBMA is broken, allowing Comex premiums to London spot to go unchallenged.

It is increasingly possible the gold contract is evolving into deep crisis, and that force majeure might have to be declared if, as seems increasingly inevitable, a wider banking crisis ensues.